It is our great pleasure to inform you that you are a Finalist in the 13th Annual National Indie Excellence Awards. Your book truly embodies the excellence that this award was created to celebrate, and we salute you and your fine work.

The lists of winners and finalists are proudly displayed on our website, please log on to www.indieexcellence.com and click the Winners & Finalists tab to see your name and book cover highlighted for all to see.  Awards are available for download and purchase on our website including: cover stickers, certificates, and medals. The 13th Annual NIEA contest's Press Release will go out to a wide array of news and media outlets, it is also on our website as a download for your use.

The entire team at the National Indie Excellence Awards sincerely hope your participation in our contest will serve you well in the your ongoing success. You have our deepest congratulations.

I love the song Wicked Games and every version of it that's out there. I feel the song and the lyric resonates well with Heartaches Bad Boy Vibes series. Browse  through my favorite picks of this song in the links below.

Click the picture above to view the San Francisco Book Review of Heartaches Bad Boy Vibes!

Rape is a serious crime. Its one that has been plaguing societies the world over since quite possible the start of time. Its still around for a reason. And that reason is the lack of education. The inhibited thinking of many societies across the globe is the reason for this sickness of mind that causes such crimes. The approach adopted globally to strive against this problem is clearly wrong or else the outcome would have spoken for itself. This is why I wrote my book the way I did. Unblemished and open. I tell it like it is. The reality of the crime cannot be submerged with pretty words. It must not. Instead the awareness of it should be as raw as the crime itself is. If we can embrace that truth then we will know the way forward.

This April 11 to 18th take a journey of a lifetime down the literary path off across the written plains in an experience never to be forgotten and not for the faint of heart- in a romantic trilogy Heartaches Bad Boy Vibes.

Hosted by Magic of Books Promotions. 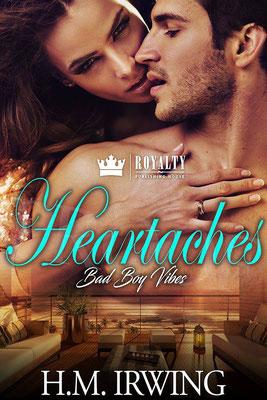 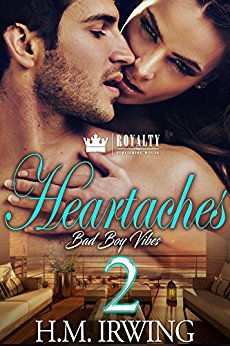 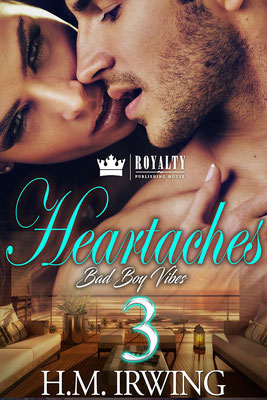 Anna Walters-Simmons has just lost her stepfather. For her and her mother, it’s no big loss; the abusive bastard had been nothing but trouble for the past eleven years. Unfortunately, his death has brought another trouble into their lives: Brian, Anna’s stepbrother who, for reasons still unclear, murdered his own father. When one of the few shimmers of goodness in Anna’s life—her boyfriend, Matt—rapes her, how will she survive the darkness these problems stir within her?

Oh, the tangled webs we weave—especially in fiction! Rafe and Anna are back, and this time, their hearts are not the only ones at risk of aching. With the return of Eric Dayton and the Prestons, Rafe, Anna, Pat, and their friends are on-edge and on-guard. And now that their flawless reputations have been tarnished, who knows what Rafe’s and Anna’s abusers/rapists will do for revenge. Will evil—and money and power—win out over good? Will the ghosts of their pasts drive a wedge between Rafe and Anna? And how will the relationships and drama of their loved ones affect them?

The day of Aunt Bella and Peter Preston’s wedding is approaching, and Rafe and Anna know that they have to do everything possible in order to stop it. They have a plan which, thanks to a sly maid named Suzi, they might be able to pull off. That is, if their own emotional struggles with each other and the Prestons don’t get in the way first. What follows are 160 pages of conspiracy, tension, double-crossing, and, of course, sex and romance. Will good finally triumph over evil? Will the Prestons and Eric Dayton finally get what they deserve, and will Rafe and Anna finally get the peace that they long for? Most importantly, who will make it out alive?

The day of Aunt Bella and Peter Preston’s wedding is approaching, and Rafe and Anna know that they have to do everything possible in order to stop it. They have a plan which, thanks to a sly maid named Suzi, they might be able to pull off. That is, if their own emotional struggles with each other and the Prestons don’t get in the way first. What follows are 160 pages of conspiracy, tension, double-crossing, and, if course, sex and romance. Will good finally triumph over evil? Will the Prestons and Eric Dayton finally get what they deserve, and will Rafe and Anna finally get the peace that they long for? Most importantly, who will make it out alive?

Losing her virginity to such a charming and passionate young man felt like a dream to Anna Simmons. That dream quickly turned to a nightmare when Anna's prince charming suddenly began treating her like nothing more than a prostitute, causing her deep emotional and physical pain. Exposing her to vile situations and demeaning her in the most disgusting of ways, the love of her life was quickly exposed for the devil he was.

Anna learned a difficult life lesson from the person she thought cared for her the most- that people are not always who they seem and that those we love the most are sometimes the ones that leave us with the deepest pain. Through the bitter relationships she endured with her step-father and step-brother, Anna was forced to the realization that she must take care of herself, by any means possible.

Anna soon meets a man who is going through a similar crisis to hers. His kindness and adamancy that she must seek justice for herself gives her the motivation she needs. The genuine care and selflessness of his character helps her to realize a strength in her that she must horn into, in order to seek revenge on those who wronged her. Together, they battle their demons with an "if we go down, we'll go down together" attitude, and find a love they had never known existed. Through all of the heartache and disgust for the experiences they had gone through, they bring each other a calm and peace they had once given up on. Their relationship is unconditional and relentless, giving the notion that soulmates do exist.

Heartaches is a story of the thin line between pain and pleasure. Centered around rape, it portrays the emotional and physical damage sexual assault can result in and how love can be more powerful than hate.

Anna Simmons is a broken soul searching for meaning in her life. Shattered by a number of people she trusted, she was almost on the brink of utter despair when savior came from an unlikely source.

Rafe Brown ex-army commando returned to Australia from a base abroad with a soul fractured to splinters. Moving through life in an aimless search to vent his spleen and seek retribution, he comes across his savior from an unlikely source.

Love, lust and passion ignites but beneath it all, two soul unites.

I would rate this book 4 out of 4 stars. This is because the story was addictive from the start and I found the author's use of betrayal, kept me in suspense throughout the book. The characters were developed amazingly and I could not find a single spelling mistake in the book. The only thing I did not like about this book was the ending. The author ended the book on a cliffhanger, but considering that books in this genre usually have a predictable end, I welcomed the author's unique ending.

I would recommend this book to all romantic drama fans. This is an adult book and the reader should be prepared for the descriptive scenes in this story. The author impressed me with this book and I look forward to reading more of H.M. Irwing's books. Read more at the... The Online Book Club !

What is your book about?

It’s a story that I hope addresses a lot of hard-hitting issues that has been plaguing society since the start of time. Sexual abuse and the victimization of those who have suffered the abuse is a matter that has been overlooked by too many for too long. I first penned this story and put it up on Wattpad in 2013.

Five years on and I am still advocating its need to be told- to be read- and most importantly – to be understood- in all its explicit glory. It is my hope that the experience will if nothing more, enlighten the readers to the plight of so many.

Heartaches Bad Boy Vibes the trilogy has been controversial from the very start. It invoked strong reactions from those who read it- but the focus was not where it should have been. Strangely enough, the focus was sadly on use of harsh language, on the explicit sex scenes, on Anna Simmon’s reactions to the pleasure and dependency she felt from the rape drug.

But despite the above, I believe Heartaches Bad Boy Vibes has been the success it was meant to be. The resistance to change is always adversary and I looked at each negative feedback as it was meant to be- a seed of change has been planted. Its growth will be watered by the penmanship of another who will pick up the cause and fly with it.

Why did you write it?

I believe it was a newspaper article of rape that triggered my action into penning down this story. Naturally there have been plenty of such articles, plenty of reported stories of rape, plenty of stories of parents worried for their sons and daughters being exposed to such abuse but as always, it would be that one article that would push my need to pen down a fictitious story- that I would naively hope – to end all such real stories.

The below is an extract of the statistics that I have sought out from a website that only served to give urgency to my written words.

Australia has one of the highest rates of reported sexual assault in the world, but support workers say the number of offenders facing court and receiving prison sentences is too low.

Australia has one of the highest rates of reported sexual assault in the world, at almost 92 people per 100,000 of the population, according to the United Nations. Another survey has quoted the Australian rate at more than double the global average.

According to the UN, Australia ranks below on South Africa in rates of reported rapes.

What did you hope to achieve with the telling of this story?

I am a dreamer at heart. I believe every reality must first be dreamt.

I dream of a world where sexual abuse and exploitation no longer exists.

And I dream of a world where sex is accepted as a natural bodily need.

That the very act, written or performed- explicit or not, is not actions or words that should be swept under the covers but boldly embraced.

There is nothing wrong with any kind sex if its consensual between two willing adults.

People have tried sugar-coating sexual abuse for centuries, perhaps the bold front as taken in Heartaches Bad Boy Vibes might be the way forward. The way to bring about change.  One can only hope.